I decided to annoy the members of The Panel this week with a retelling of the exploits of their worst dating experience.  To my surprise I was met with DENIALS OF DATING???

Seriously people?  Don't you get out?  What do you do, just sit around on Facebook and Twitter all the time... ?

Oh yeah, that's what we all do.

FORTUNATELY for me, Justin, MK, myself and a SPECIAL GUEST POSTER decided to share wayyyy too much information for your enjoyment!

Lets' start off with Justin's tale of adventure!

I've never really "dated" in the traditional sense of the word, all my relationships have just, well, "happened." I don't really have all that many bad experiences from them either.
I've touched on this story before, but never really gone in-depth with it. When I landed in Phoenix just before New Years, I made my way out past security expecting to see Jen waiting for me. She wasn't there.
For the uninitiated, the terminal at PHX that I flew into has four sets of gates (A, B, C, and D), each with their own security checkpoint. Southwest operates out of both C and D, which is basically the southern half of the building. Well, apparently either the gate I came in at was changed at the last minute or she read the big board wrong (I'm leaning toward the former) I wound up coming out of the D concourse and she was waiting for me over at C. She figured out what was going on pretty quick and made her way over to me and we made our way down to baggage claim to get my stuff.
After my bag finally came around, we made our way to the elevators and the parking garage to find her car. There was just one problem: the car wasn't where she'd parked it. Right about then I'm thinking "Well, this trip's off to a great start!"
It turned out that, in the airport designer's infinite wisdom, both ends of the parking garage are designed the exact same way and we were just on the wrong side.
Thankfully, the rest of the trip was much better. Then again, you could probably argue that there was no way to go but up.
When I fly back out on Friday, Jen's going to be getting text updates from Southwest that should include my gate number. So at least THAT will be dealt with.
I'd tell her to just pick me up at the curb, but she promised to meet me with Starbucks and I can't refuse that!
-----
See what I mean?  Denial of dating?  Whatever happened to guys and gals wanting to get "Jiggy" with each other?

Let's see what the lovely MK had to share.

My grand total of two previous relationships all happened because I fell into them purely by accident. (I know...it's impressive! I tricked two boys into liking me for extended periods of time!) I don't really have a "worst dating experience ever" because I don't date. At least, not dating in the traditional sense where boy asks girl out, girl accepts, boy picks up girl at girl's house, boy drives girl in his car to dinner and a movie, then boy returns girl home with a kiss on her doorstep.

I have, however, been intentionally set up with guys at some of my friends' parties. Invariably, because I am so subconsciously picky or because the chemistry just isn't there, I start to play this game in my head. It started out as an anger management tool for dealing with my 20-year-old sister's crazy outburtsts (EXAMPLE: two Saturdays ago I live-Tweeted calling the cops on her after she tried to break down my bedroom door when I refused to give her my ID so she could go out drinking with friends), but quickly it's become my default way to deal with annoying people. I tune out what they're saying and instead I focus on the room we're currently in. Then I tap my vast resources --- from "Murder, She Wrote" and "Columbo" to "CSI" and "Dexter," from Sherlock Holmes to Hercule Poirot, etc --- and I try to figure out how I would kill the source of my annoyance and get away with the crime using only objects present in the room. It's great fun, as far as intellectual challenges go! I highly recommend it as a stress buster. The game part, not the actual killing.

OK now MK.  You know if that was 140 characters long that would have had a mandatory #itputsthelotiononitsskin hash.


All right, time to get in the wayback machine and let's hit the time before I met THE WIFE when I was trying to meet "Chicks."

It all begins in my Junior year in high school where I was a stud in my own mind with my skin tight acid washed jeans and mullet which reeked of awesome.  I knew chicks dug me, they just didn't know it yet.

I was going to change that and become a one man pile of Awesome! (Yeah it was the late 80's we said AWESOME a lot mainly because Rad was old by then.)  I put my best moves on this chick who shall remain nameless to protect her virtue (see I am not only Awesome, but a gentleman too!) and she agreed to go to the movies with me.  In all honesty my "Moves" consisted of stammering, trying not to wet myself or fart and staring at the floor but somehow it worked.

I picked up the young lady at the pre-appointed time and went hang out at the mall and then to whatever the movie was (Jealous yet ladies?).  After the movie I spotted an opening and worked up the courage to kiss her before driving her home.  The next day she wasn't at school.  I chalked it up to her being in recovery from the devastating effect of my AWESOMENESS!

Fact was, she had Strep Throat.  I was never so miserable in my life as I was from that bout of disease.  I guess that is why back in WWII they used to put up those signs warning the troops. 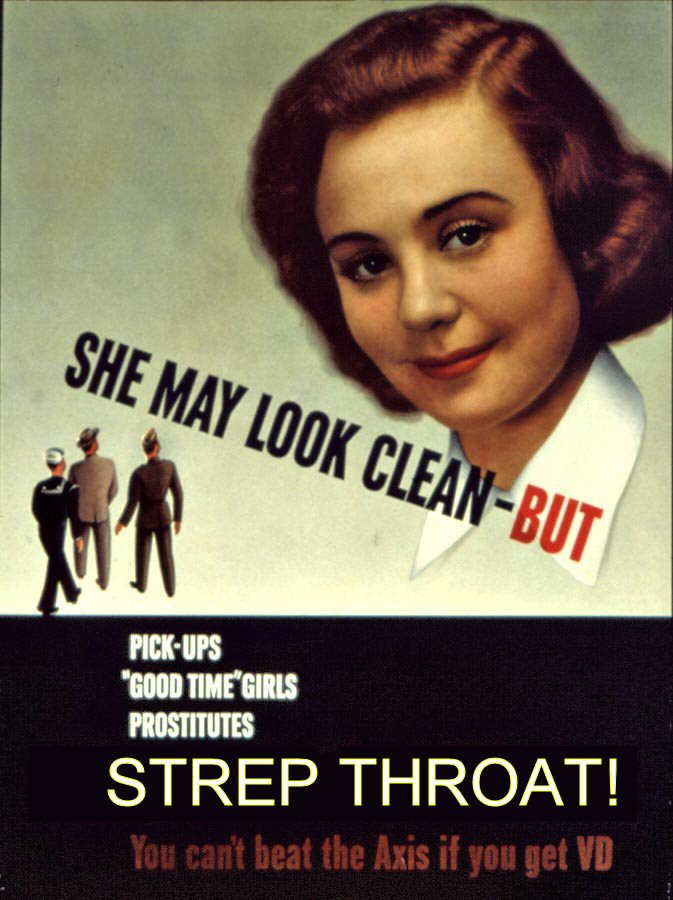 So anyway I recovered and fortunately since NO ONE ELSE IN THE WORLD DATES ANYMORE our buddy MK asked Teamcreepy member Fluffy to provide a horrible dating experience for us.


His Bio:
Fluffy's a very queer man from Ohio who loves video games, nerds, and thinking about the nature of his emo for hours on end. Follow him on twitter; his username's @aravain. He comes to The Panel as a last-minute guest blog, courtesy of the gorgeously boobacious Mollie Katie.
Lets see what terrors lay before us!
Oh my goodness, I need to preface this with a note; in the world of gay dating, quite often, people *expect* sex, on the first date even! I know, SCANDALOUS. That was me for a while, until I took a step back and saw how ridiculous it was. In retrospect, I feel kinda bad.
Anyway, I went over this guy's house once. This was meant to be a date, but it was a pretty flimsy thing; like, we'd met on the internet and he said "so, wanna come over?" and I said sure. I should have let the overly lovey-dovey type of stuff warn me off of him, because he was acting like we were already in a relationship over the internet after just a little bit of talking. I didn't. I'm stupid. So I get there and I locked my keys in my car.
I LOCKED MY KEYS IN MY FUCKING CAR.
Strike one for the night.
Once AAA gets through and fixes that, it was wonderful. Hah. Kidding. So we go into his mother's house, and start talking. Somehow we got onto the topic of his mother and his soon-to-be step-father. For an hour. An hour straight. For an hour I listened to him bitch about how he hated this guy because he acted like a two year old. It was ridiculous. During this hour I'm sitting on a love seat, and he's sitting on an easy chair; I'm moving pillows around and BLATANTLY making a space for him to come join me, figuring "hey, if it's definitely not going to a second date, at least I'll loosen my bolts a bit."
He didn't get it. Once he'd ended his diatribe, I blatantly told him to join me on the couch, and it was extremely clear that I wanted him to stop talking and makeout or something.  Well the makeouts started.
Oh my goodness.
He had a snake bite lip piercing and that was weird, but the really bad thing was that he seemed to think that the point of kissing was to EAT MY FACE OFF and LICK MY NOSE. No lie. My face was wet, all over.
Strike two for the night.
Through subtlety (read: BITING his lips to keep them still) I managed to stop the madness of his puppy attack. Then he moved down to my neck.
I have never been more bruised. I like hickies, I like bruises. My entire neck (all the way 'round) was a bruise. I daresay I started to give as good as I was getting.
STRIKE THREE.
I hadn't noticed that this started to turn into some sort of competitive thing for me, or that I was angry that he was so bad at stuff and that he had wasted an hour of my time. So I started to molest him a little. Bing! I found the button. He did not like or want that. So I kept doing it. I wasn't going to be the one to STOP the encounter, but I sure as hell wanted it to stop. I was going to WIN, damnit.
So I kept doing it until he eventually got up, saying that he needed to do laundry. I laughed (he'd left me alone in the entire upstairs. No, I didn't take anything, but I could have) and then went over to the stairs leading down to his basement and called down. "I guess I'll head out" and did so. In my car I drove a block away and inspected the damage. He'd wasted 3 hours, total.
I SPENT TWO HOURS GETTING MY FACE LICKED OFF AND MY NECK CHEWED ON.
Oi. I got out though, I SURVIVED. Thank goodness.
-----
Honestly the first thing I thought of was this:
Thanks, Fluffy for joining in and sharing!
Posted by Tots @ 12:20 PM

What is The Panel?

The Panel is a group of Twitterers that have banded together to answer questions, ranging from the serious to the outrageous. So sit back, relax, and enjoy.

Have a question for us?

If you have a question you'd like to see The Panel address, send an email to thepanel@jrtblog.com and you just might see your question here.